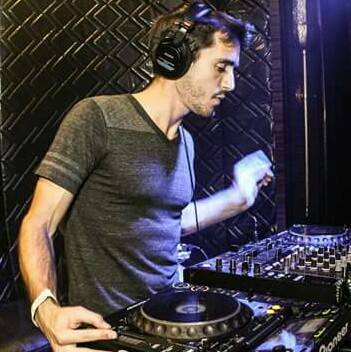 DANIEL “DREV” REVKIN is a dynamic and multi-talented DJ / producer residing in Los Angeles, CA. His signature style is trance, but you can find elements of electro and techno in some of his mega-club sets. Inspired by Armin van Buuren and Markus Schulz, Drev intuitively understands that what sets a “good” DJ apart from a “great” is connecting with the crowd.  Jason T. Hill recently sat down with Daniel and asked him a few questions to get little more insight on who Drev is.

Were you always an EDM addict? When did you take your first hit?
I grew up listening to classic rock and occasionally dabbled in Top 40. However, I first discovered EDM after joining the army. While living in the Middle East, we used to clean the barracks listening to Infected Mushroom. Then, when I returned to the U.S. in 2010, I saw Tron Legacy. That’s when my EDM adventure truly began.

And from then you were hooked?
Yes! I was working security at this building that was basically empty, and had a KILLER sound system. I spent endless days listening to a Daft Punk Pandora Radio station. From there, I moved on to Deadmau5, David Guetta, Afrojack, Nervo and many others.

I’ve seen you spin. You can do it all, but I’d say Trance is your THANG. Am I right?
For sure! I moved to New Orleans to work on Dawn of the Planet Apes, and then I met DJ Ordered Chaos. Chaos introduced me to my idols: Armin, Markus, Orjan, and more! It was from then that I truly became a trance addict.

I heard through the grapevine that you’re a self-taught DJ?
Yup. After heading back to LA and running the gauntlet for post-production, I felt compelled to start teaching myself to DJ.

Were you always ON FIRE behind the decks?
No way! I started off with just a two-deck mixer and a copy of Traktor. I failed through many sets before eventually starting to find my groove. Eventually, I opened up a Mixcloud account, and began doing weekly mixes ranging from 1-2 hours. Finally, I felt comfortable with the notion of actually playing at a public venue.

OK. So, tell us your “secret.” How did you get past all the red tape to spin at Avalon?!
Utilizing Craig’s List of all things, I began responding to a bunch of advertisements for DJ gigs. Through the luck of the draw, I got in touch with an amazing dude named DJ T3ddy. T3ddy hooked me up with my first big gig at Avalon for Clubhouse on Memorial Day weekend. During the weeks prior to Memorial Day, I did a few small gigs at Couture nightclub through DJ Kash. Spinning at Couture prepared me for what to bring to the table at a huge club like Avalon.

And I heard you KILLED it! You’re not a one-hit wonder are you? Any upcoming appearances we should look out for?
Since Memorial Day, I’ve been playing at different gigs throughout Los Angeles and Orange County. You can find me at intimate venues such as Bassface’s Electronic Music party in North Hollywood, and large venues such as Sutra in Cosa Mesa. The venue doesn’t matter though – it’s all about the crowd. My passion is DJing. I just want to inspire people to move through the music I love.

Come say hello to Daniel as he throws down at Ten Nightclub on Friday, July 31, 2015. Daniel’s set at Ten will be his farewell gig as he will be on assignment for work in the upcoming months.

Click play below to check out Drev’s latest mix.

Long Day 018 by Drev on Mixcloud

Jason T. Hill is a Contributing Composer for Netflix Movie: “Boy Meets Girl”
Jason can be reached via his blog at http://jasonthomashill.wordpress.com

This site uses Akismet to reduce spam. Learn how your comment data is processed.